Dozens of people and police bus: what happens under a SBU insulator, which brought Saakashvili 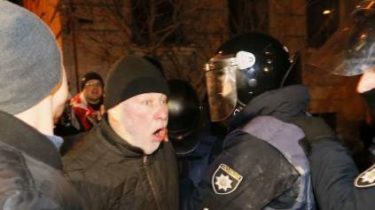 Several dozen people gathered in the Askold lane near the detention center of the security Service, which had earlier taken the detained former head of the Odessa regional state administration of Mikheil Saakashvili.

On it informs UKRINFORM.

The people behave quietly, from time to time shouting: “Kiev, get up!” and “Shame”. No flags and placards, the protesters have not yet.

“The entrance of the alley blocked by police patrol cars, and the road in the lane near the detention center was blocked by a live law enforcement cordon, behind which is placed across the alley a police bus”, – is spoken in the message.

Protesters have already brought the instrument, which amplifies the sound.