Sources said, as Yatsenyuk traveled to Poroshenko because of the law for the dismissal of Sytnyk 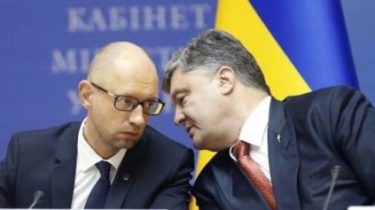 A bill that would give the Parliament the opportunity to dismiss the heads of NABOO, SAP and other newly created bodies had been removed from the agenda after a night of conversation between the leader of the “popular front” Arseniy Yatsenyuk and President of Ukraine Petro Poroshenko. About this TSN.news Agency reported a source in the leadership of the NF. The interviewee said that the bill wrote the people’s Deputy from BPP Ruslan Knyazevich.

According to sources, the idea of the document was balanced all the authorities.

“Parliament has the constitutional authority regarding the impeachment of President, resignation of the Cabinet of Ministers, the dismissal of members of the government, the Prosecutor General and the Chairman of the SBU. The Constitution provides for the existence of parliamentary control over all state authorities”, – said the source in the faction Yatsenyuk.

In the original bill, which was written by Knezevici, indicated that the initiative opinion of the head of the NABOO, RRT, SAP and members of the NAPC needs to belong to the MP.

In turn, the popular front has proposed to do in the case of GPU and SBU: the authority to initiate belongs or 150 people’s deputies of Ukraine (which is fuse the political motivation), or the President, or the Cabinet of Ministers, which can introduce a resolution of no confidence in the Director of NABU, RRT Director, head of SAP, to members of the NAPC. It was not only about NABOO, and all newly created bodies, however, all perceived that this law is against the anti-corruption Bureau of Artem Sytnik, although his question on the agenda was not.

Sources also say that late in the evening of 6 December, Arseny Yatsenyuk, interior Minister Arsen Avakov and speaker of the Verkhovna Rada Andriy Parubiy met with U.S. Ambassador Marie Yovanovitch. After a conversation with the US Ambassador Yatsenyuk went to Poroshenko, which said that the law will be removed from the agenda.

“Ukraine is losing its soul to corruption.” The reaction of the world to the conflict of the GPU and NABOO

“Poroshenko agreed and at 3am the law was removed from the agenda of the Parliament,” he added.

The correspondent of TSN.ia Roman Kravets.

We will remind, on 6 December, the chairmen of the parliamentary faction “block of Petro Poroshenko” Arthur Gerasimov and the “people’s front” Maxim Burbak have registered in the Verkhovna Rada a bill under which the heads of anti-corruption bodies could release it without an external audit.

However, the document gave Parliament the sole right of dismissal of the head of NABOO, SAP and members of the NAPC was removed from the agenda VR the night of 6 to 7 December.