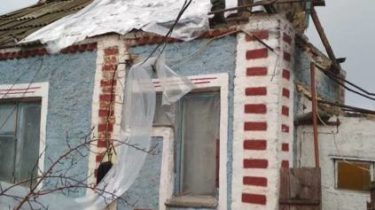 On the arc Svetlodarsk doesn’t stop heavy fire. After armed forces Day is only one day in the Donbas killed four soldiers.

As reported in the story TSN.Week, fighters can’t calm down after losing control of two villages near Svetlodarsk. In particular, per night for Gladsome Travneve and can fly up to fifty minutes the Militants want to force the Ukrainians to retreat, but that only gives the opposite effect.

In Travneve first came the international mission of the UN office for the coordination of humanitarian Affairs. On the way to the village they kept a safe distance of not less than 200 meters from the road. Journalists were asked not to remove them together with the military. Their task is to bring warm clothes and learn about what is missing.

Electricity is also a weapon in the hands of militants. Wire in the village “Dnrovtsy” killed deliberately and now openly say local – light not give, the village will be the Ukrainian flag. “I collected twenty. Went to their checkpoint, so they gave light. Say, who’s in charge here chief. A guy came and said he. I say turn on the lights. He said that it would not get light until they leave,” said a local resident.

Ukrainians are not in a hurry to depart. The soldiers brought a generatorhooked up to it the whole village. However, with the power supply in the TV is back local TV channels of the militants, because the Ukrainian didn’t show.

These channels will never tell you that the mortars hit the village from the occupied Horlivka and Ukrainian soldiers personally repair the broken roof over the heads of the peasants. The man from the damaged house military doctors have taken to hospital, but the propaganda of the separatists worked instantly and said that he was lucky to be tortured.

However, recorded words of gratitude to the military is rarely possible, because people fear the return of “DNR”. In the Donbass used to live in fear, says local man. “People are afraid. They feared that they salary will be taken away. They die of hunger, that is kept slaves. People are kept constantly in fear,” said the fighter with the call sign “Lieutenant”. That fear is the main weapon of militants in Svetlodarsk. The enemy is trying to intimidate the Ukrainians, not to give them up.

In turn, the fighting continued in the area. Sometimes it seems that Svetlodarsk arc is some hellish lottery. Someone find the bullets, and some medals. Recently, the soldiers managed to repulse the attack by the saboteurs. They captured a Russian flamethrower. The one who had to pull the trigger, also arrived from Russia, assured the scouts. The flamethrower call “Tungus”. It calls himself Gregory Kosowski from Yakutsk. He spent three years in a row shooting at Ukrainians. But during the latest offensive, he fled from the battlefield, leaving the Ukrainians their “Shaitan-pipe”.

Therefore, Russia will not spare their “Tungus” to Svetlodarsk crucible, a world to the liberated villages will remain only a dream.