Ukraine must ensure the independence of the EMB – Grybauskaite 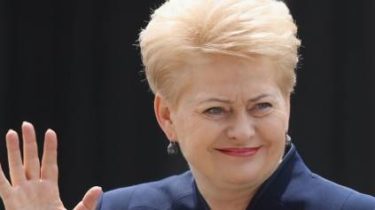 The Ukrainian government must ensure the independence of the National anticorruption Bureau of Ukraine, whose work should not interfere with other organs.

The President of Lithuania Dalia Grybauskaite said during a joint press conference with his Ukrainian counterpart Petro Poroshenko in Vilnius.

“Our main requirement for Ukraine is to ensure the independence of the NEB so that the policy could not affect the operation of NABOO. At the same time the NEB in any way should not participate in political activity of Ukraine”, – she said.

At the same time, the President of Lithuania expressed his concern for the state of reforms in Ukraine in the field of fight against corruption.

“I would like to very clearly state that both the European Union and Lithuania support the reforms aimed at combating corruption in all sectors without exception. But these reforms need to be consistent. They should be open and those that will ensure the independence of all state agencies from political influence,” said Grybauskaite.

Before that, the then head of the anti-corruption Committee of the Parliament Yegor Sobolev is not allowed to consider on the Committee of a candidate for the office of the auditor NABOO Nigel brown, because he was “discovered manipulation of the document of the Parliament to promote Mr. brown.” Sobolev also accused brown of having links with the Russian oligarchs. 13 MPs to bypass the Chairman of the Committee met and voted for candidates.

12 Jul anti-corruption Committee of the Verkhovna Rada recommended that the four candidates for the position of auditor of NABOO.