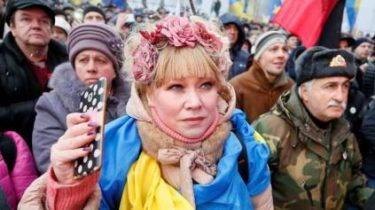 The participants of the March for the adoption of the law of impeachment came to St. Resnicow in Kiev to the building of the Prosecutor General of Ukraine demanding the resignation of Prosecutor General Yury Lutsenko, reports UNIAN.

According to the correspondent, the rally near the remand prison of the SBU, where the leader of the party “new force” Mikheil Saakashvili, lasted about 40 minutes. There activists lit a few flares, then the convoy went in the direction of the Prosecutor General.

On the road, the protesters chanted “Yury Lutsenko corrupt” and “Yuri on the bench.”

It is reported that now the main entrance to the GPU is heavily guarded by the officers of the national police in flak jackets and helmets.

We will remind, in the morning in Kiev was held a March of supporters of Mikheil Saakashvili. Protesters who took to the streets of the capital, demanded the release of the party leader “Movement new forces” and urged President Poroshenko and Russia’s Prosecutor General Yury Lutsenko to resign.

Later they went in the direction of the SBU, which now contains Saakashvili himself. And on the way smashed the window of the store Roshen near the metro station Arsenalna metro station.