“They want to intimidate you,” Saakashvili ward appealed to his supporters 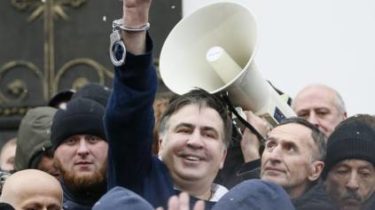 The leader of the “Movement novih forces,” Mikheil Saakashvili said about the political pressure on him, and the accusations against himself was called a liar.

The circulation policy to his supporters, written by hand in the detention center, read one of the lawyers of Saakashvili after leaving the building of the SBU.

“Baryzhnyh the authorities arrested me for false accusations. So they want to intimidate you. Don’t be afraid. Feel free to go out on Sunday’s peaceful rally “For impeachment”, – Saakashvili said.

“Our victory is no alternative,” – said the politician.