Under the prison, where they hold Saakashvili, occurred the first skirmish 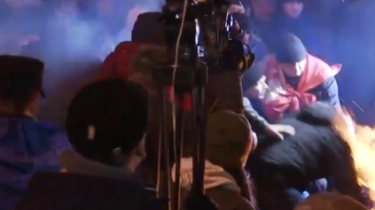 Under the building of SBU in the alley Askold of Kiev, where police detained the politician Mikheil Saakashvili clashed.

Unknown knocked a barrel, which burned wood. It immediately grabbed the activists, called a provocateur and turned his head away from the main group of people.