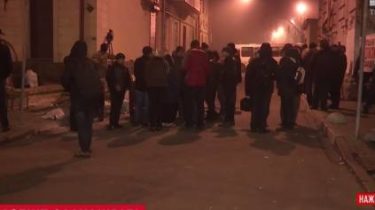 Continues the action of the supporters of the policy of Mikheil Saakashvili in a remand prison of the SBU in Kiev. People on duty, so as not to miss the moment when their leader would take out the court, says the story TSN.19:30.

In this case, the activists plan to call on the support of other colleagues, and themselves in every way to hinder the transportation of the detainee. “Do not give. Lie down the bones,” says one of the protesters. Another adds that communicated with law enforcement officers, and those, it seems, are not configured to conflict, but the protesters it doesn’t. “Anything can happen”, they say.

The situation is under jail as of Saturday evening, December 9, calm. On the street on duty, two dozen activists, the entrance to the detention center law enforcement officers blocked the bus, around which about ten are on duty police officers. In the eyes of journalists to the side of the detention center drove a white van with black tinted Windows, inside of which were also law enforcement officers, and a van. Eyewitnesses suggest that it is likely a night shift that would guard the school until Sunday morning.

Prosecutors are preparing materials for the court against Saakashvili

On the street the atmosphere of expectations: people warm themselves near the barrels with fire and talking about politics. No clashes and confrontations during the day did not happen. While no one knows exactly when Saakashvili will elect a measure of restraint. According to rumors, this will not happen on Saturday. It is only known that the issue should be considered in Pechersky district court of the capital. More protesters are on duty in a tent camp near the Parliament – there is estimated that is one hundred and fifty people. Was promised for Saturday evening the Assembly never convened – the protesters focused on the preparation of the March through the centre of the capital in the afternoon on Sunday..

As previously reported, the lawyer Ruslan Chernolutsky said that he has no information on the date of the hearing on the remand of the defendant. “Currently, I have a lot of missed calls. We agreed at 12.00 with a senior Prosecutor Dombrovski, who wrote the message on suspicion that he will give us such information. But while we don’t own it,” said the lawyer. The people’s Deputy Derevyanko added that in order for the court held, “should warn for three hours and present a petition for the preventive measure”.