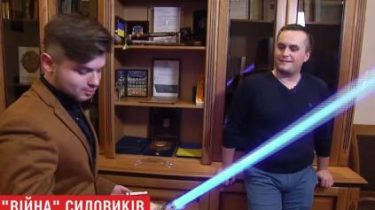 The head of the Specialized anti-corruption prosecutors Nazar Golodnitsky received during the visit to USA commemorative statuette.

He reported about it on air of TSN.Week.

It costs $ 20. “I think this is one of the symbols of support to anti-corruption bodies, which probably do not need to declare in the Declaration. Think costs $ 20. Will stand in the most conspicuous place,” he said.

He also keeps the office of “sword of the Jedi”. “Sometimes it just relax when you turn it on,” added Holodnitsky.

Holodnitsky defined the status of FBI agents in Ukraine

Earlier Holodnitsky said that in the State Department “1000%” support of anti-corruption authorities in Ukraine. Washington added that the conflicts between law enforcement agencies should be resolved through the investigation and relevant judicial rulings.