“Slap Poroshenko and Lutsenko”: how politicians reacted to the court’s decision to let Saakashvili 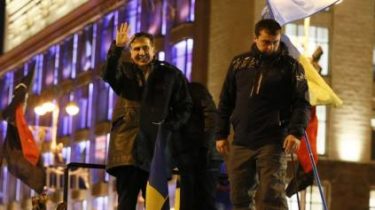 The Ukrainian politicians on-to a miscellaneous reacted to the decision of the Pechersk district court to release unconditionally the leader of the “Movement novih forces” of Mikheil Saakashvili.

Videobecause the court chose a measure of restraint Saakashvili

So, the Deputy from the radical Igor Mosiychuk believes that the court’s decision “a public slap in the face” to President Petro Poroshenko and Prosecutor General Yury Lutsenko.

“I will refrain from emotion.” Lutsenko said that the GPU is going to appeal the decision regarding Saakashvili

“I am firmly convinced that today’s decision by the Pechersky court on Saakashvili’s written outside of the Ukrainian state! Waiting for the consequences! And it sverhsekretnoj public slap in the face to President Poroshenko and Prosecutor General Yury Lutsenko. What’s next?” – wrote Mosiychuk in Facebook.

His fellow party member Andrey Lozovoy sure that Saakashvili is actually not released the judge Larisa Sokol, and Poroshenko, and accused the President that he gave up the slack.

But “ukropovets” Vitaliy kupriy Sokol called the “judge of the third Millennium”.

The Deputy from “Samopomich” semen Semenchenko believes that the judge dismissed Saakashvili because of pressure from the media and the public. And then he said that on the same day, the court in Mariupol has refused to release the activist of the Movement “Vyzvalenne”.

In Kiev under the pressure of people and media, the judge released Michel Saakashvili from custody. Congratulations to RNB and Misha. In Mariupol, Donetsk…

An independent MP Borislav Bereza considers that the appeal is won by the party whose arguments were more convincing. In his opinion, the judges remember the fate of judge Kireyev, who sent to jail Yulia Tymoshenko, and they remember that power can change. Therefore, judges are afraid to take illegal decisions.

When I said that no judge would venture to make an illegal decision according to Saakashvili, many didn’t believe me. I to…

A member of the Pro-presidential faction in the Parliament Serhiy Leshchenko , in turn, believes that the court’s decision against Saakashvili is a personal loss of Lutsenko, since the arrest policy that has put everything on the line. “In a normal country, such a public Prosecutor should resign,” – said Leshchenko.

His fellow party member and supporter Mustafa Nayem said “the invalidity of public statements, Yuriy Lutsenko,” and “a blatant lack of professionalism, carelessness and recklessness of its subordinates.” However, according to the Deputy, “this does not mean that Saakashvili is at fault and does not absolve him of all issues.”

Nye also said that the trial of the politician observes the world community and, according to him, the ambassadors of Western countries in shock: they expect the GPU to something more powerful and professional.

Saakashvili has compared himself with Khodorkovsky and Tymoshenko

In addition, Mustafa Nayem warned Lutsenko: if he will “choose the path “to go to the end and contrary” to save face, it is dangerous for him and for the country as a whole”.

I think now with Yuriy Lutsenko many well-wishers willing to help and suggest what to do next. It is important to …

Videosgallery, after the court decision went in a rented flat.