Tree with the scent of citrus trees and facilities for 5 thousand: what struck the buyers of the first day of sales of Christmas beauties 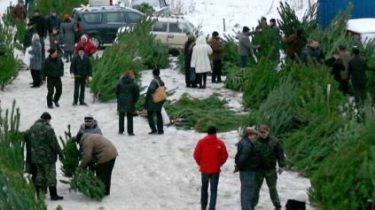 In Ukraine began to work Christmas fair, which this year plan to implement half a million Christmas trees. The first day of sales already gave a lot of reasons to reflect where it is better to look for a fluffy beauty, says the story TSN.19:30.

In Kiev on the capital’s Christmas market is small, but bushy trees are 400-500 hryvnia, Packed in human growth, but not so fluffy that you can buy in the range of 200-300. A tree wound from the branches, pull on all 700, wreaths can be purchased for 500, and blue luxury Christmas trees are from 3 to 5 thousand. Everywhere you can and should haggle.

In Zaporozhye it is possible to find trees at a minimum price: average trees within 180 hryvnia, and a two-meter just 360. However, this price is not the Christmas Bazaar, and the zelenkhoz, where Christmas trees can be found for every taste and from customers no end – prices are lower and the tree can even be bought together with the land already in the pot. The tastes of different customers – from small juniper, Crimean pine, and up to the blue spruce. They are the most valuable, but still cheaper than in the capital – up to 2 thousand hryvnia. The real hit of the season is a Douglas fir, a Christmas tree crossed with a fir. This tree smells like citrus. But most buyers choose the traditional Crimean pine.

A legal holiday. Where how much to buy a Christmas tree and how to check that it felled legally

But in Lviv Christmas fair is already working at full capacity, however, to buy a live Christmas tree is not possible – Christmas markets in the city will start only after four days. Meantime, you can stock up on Christmas-Christmas songs and toys on the Christmas tree. Usually live Christmas trees in town are starting to sell on Nicholas, but artificial in major hypermarkets appeared two weeks ago. The greatest demand is for silver plated tree cost 4 thousand UAH.