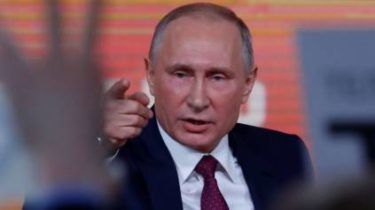 The President of Russia Vladimir Putin held on December 14 thirteenth annual press conference, during which touched upon a number of geopolitical issues.

In particular, the leader of the Russian Federation has complained that the Minsk process on the settlement of situation in Donbas is ineffective.

“In my opinion, primarily due to the unconstructive position of the representatives of the current authorities in Kiev. No desire to implement Minsk agreements. No desire to start a real political process, the completion of which can be implementation of the agreement on the special status of Donbass, as enshrined in the relevant law adopted by the Parliament. Untyped but still under various pretexts in force. The parameters of this law are well known,” he said.

According to Putin, the US are essentially full-fledged and rightful participants in the settlement process, regardless of whether they are participants of the Normandy format.

In addition, he praised the work of the President trump, who has a “serious enough to achieve even for the time period that he works.”

“Look at the markets as they grew up. This speaks to investor confidence in the American economy. This suggests that they trust that the President does trump in this area. I think that there are things that he would like to do, but so far I couldn’t. We are talking about health care reform. He talked about foreign policy – improving relations with Russia. It is obvious that, even if he wanted to, he is not able to do it because of a known limitation. I think in the interests of the American and Russian peoples, we normalize our relations, we will support them”, – said the Russian leader.

However, Putin hinted that an end to the military aggression in Eastern Ukraine is not going and once again assured that the alleged Russian troops in the Donbas not.

“The source – a coup, an armed unconstitutional seizure of power. Part of Ukraine did not agree and began to fight with the dissenters, using intelligence, and then ensure the full implementation of the armed forces. The Russian army on the territory of Donbass no, but it created certain military police units that are self sufficient and ready to repel any large-scale military action against the Donbass. This corresponds to the interests of the people who live there. Because if they will not, the slaughter will be carried out by the nationalist battalions,” – said the Russian President, who believes that Ukrainians and Russians are one people, and the annexation of Crimea is a return to the Peninsula, which “in 1954, took the Crimea back given, then the Union in violation of applicable law, then demanded the consent of the Supreme Soviet of the RSFSR. It was then decided by the Presidium of the Verkhovna Rada”.

“Ukraine should be independent. They have the right… But…”, he added.

Moreover, Putin accused Ukraine of delaying the exchange of hostages.

“On behalf of the President Poroshenko is doing Medvedchuk. He asked, as exchanges have not been, to influence the leadership of the unrecognized “republics” that they agreed to this exchange. We undertook this work, and for the first time I even talked to these “leaders”. They agreed. Then Medvedchuk, of course, in agreement with the Ukrainian side, that was their offer, brought the list with 67 people on one side and 300 on the other side. It was the Ukrainian list. And agreed with him. Then he said that it is bad and needs this change. Again and took it all stopped,” he said.

Putin – Americans on North Korea: “You are all normal people?”

Separately, the Russian President said that is going to run for the 2018 elections as the independent candidateand assured that the government “was not afraid of anyone and is not afraid”, answering the question presenter and journalist Ksenia Sobchak on competition during the election campaign. But he compared the Russian opposition leader Alexei Navalny and Sobchak itself with the controversial Georgian politician, deprived of Ukrainian citizenship, Mikheil Saakashvili.

“Those whom you have named, is Saakashvili, Russian edition only. You want those Saakashvili destabilized the situation in the country? You want we have experienced from one Maidan to another? We all it already passed. You want it back? I am sure that the vast majority of Russian citizens do not want”, – said Putin, before calling the writer “a slap in the face of Georgian and Ukrainian peoples“.