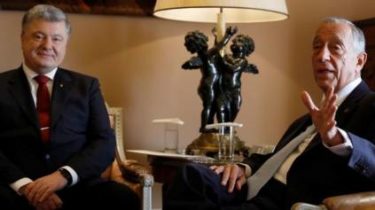 Ukraine has proposed that Portugal develop a joint fire plane on the basis of the State enterprise “Antonov”.

Ukrainian “Ruslan” delivered to the engine for Airbus, which is partly scattered over the Atlantic

About it reported in a Twitter press Secretary of the President of Ukraine Svyatoslav Tsigalko.

Ukraine has proposed that Portugal develop a joint fire aircraft based on the Antonov. pic.twitter.com/iv8PvDEwGy

“We suggest that on the basis of “Antonov” we have developed a joint project for the production of aircraft fire. Confident that this will improve security in Portugal and will be very successful and efficient project of our cooperation”, – quotes Poroshenko a press-service of the head of state.

He also noted that “we are waiting for the Portuguese investors who will take advantage of the opportunities for privatization.”

The President noted that despite the fact that Portugal is in the far West of the European continent and Ukraine to its East, the country is very close and always willing to help. He recalled that Ukraine helped Portugal during a fire in this country.

On December 17-18, President of Ukraine Petro Poroshenko is on an official visit in Portugal. Now he held a meeting with the President of Portugal, Marcelo Rebelo de Sousa.

We will remind, earlier it was signed the document about the serial production of aircraft An-132 in Saudi Arabia.