The storming of the October Palace: police are still 11 men 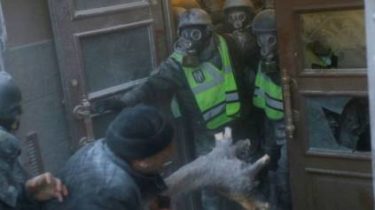 In the hospital are still 11 members of the National guard, injured in the clashes near the Oktyabrsky Palace in Central Kiev.

“Now in the hospital with the diagnosis “poisoning with unknown substance” as well as facial injuries is 11 national guardsmen, one of them is the ophthalmic branch, his eye injury,” said Blischik.

Poisoning and explosive package in the hood: in clashes at the October Palace suffered 60 national guardsmen

All, according to her, medical attention 17 Dec turned 27 police officers and over 15 natsgvardia.

The police said that doctors treated two civilians, but was not hospitalized.

In addition, the speaker reported that no detainees.

Sunday, December 17, supporters of Mikheil Saakashvili, led by their leader gave another “March with the impeachment”. During his speech from the stage , Saakashvili said that in the October Palace will be the “headquarters” of the protest, after which along with the protesters went there.