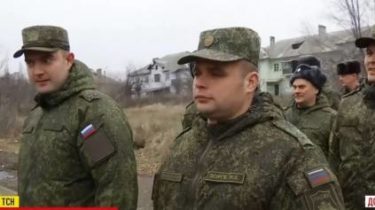 Russian observers monitoring the cease-fire leaving Ukraine. They have left their observation posts and went home, according to a story TSN.19:30.

“No comment,” – said the Russian military to the question about the reasons for the termination of his mission. From official Russian sources, in early December there were alleged intolerable conditions in Ukraine for the representatives of the Russian Federation in the Supervisory center. “I am very pleased with the way they live, and are very concerned about the statements of the Russian Federation”, – said the head of the Ukrainian side of the JCCC General Yuri OST.

He said that 39 of the Russians worked on all line of differentiation, whereas Ukrainians in the occupied territory only six and they are deprived of any rights. “Anywhere they do not leave them anywhere on the boundary line of the parties is not allowed. We have repeatedly appealed to the representatives of the Russian Federation to make a mirror, but the Russians did not go forward,” he told OST. In the centre of the mission in Soledar Ukrainian and Russian observers lived in the same building but on different floors. Between the groups communicate only by working together they can only be seen on the briefing and the workplace.

All Russian military who were at JCCC, leave the territory of Ukraine – Russian foreign Ministry

The staff of the centre, and the Ukrainian military, in one voice told that there were no conflicts, conditions can be called close to perfect. What problems in the service there, confirmed by the Russian military. “We communicate well, no problem,” confirmed even by the Russian members of the JCCC.Room and conditions were everywhere the same for Ukrainians and Russians – lived in the same hotel, ate in the same dining room. “First, Ukraine’s eating, and then Russia. The menu is the same – anyone any better or worse,” – says the chef.

Ate Russian military at the expense of the Ukrainian armed forces. They provided fuel and paid all utilities. “During the war left 4 million”, – said the General industrial standards. What could be dissatisfied – the Ukrainian officers don’t understand. Therefore we are convinced that the reason is indeed political, and look for her to be in Moscow and not Donbass. Analysts suggest that it’s probably just the change of the regime of border crossing for citizens of Russia that since the new year enters Ukraine. According to him, every Russian must be fingerprinted and to provide comprehensive information about yourself, so it is possible that the Kremlin simply did not want to spoil its possible agents.

The foreign Ministry of Ukraine has called Russia’s decision to withdraw troops from JCCC in the Donbas, “the next provocation”

Now what will be the fate of the center are unknown. At the headquarters of ATO predict the escalation of the conflict because the Russian side wants to show the world that without observers, things get worse. Indeed, the Russians did not manage to leave in the evening as the fighters hit the “Hail” Novoluganskoe. The military do not panic, but prepare for a significant escalation along the line of confrontation