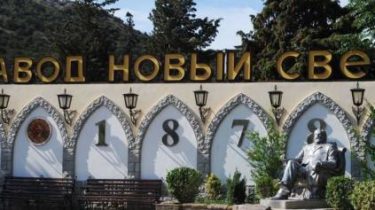 The Russian company “southern project” was bought for 1.5 billion rubles legendary factory of sparkling wines “Noviy Svet”, which is located in Russia-occupied Crimea.

In the tender for the purchase of the winery, was also attended by the company “”Voom-box invest”, but finally the company has got company from Saint-Petersburg, OOO “South project”, which is a subsidiary of the Bank “Russia”. The initial package price 100% of the shares amounted to 1,496 billion. Before the plant was entirely in the ownership of the occupied Crimea.

It is known that 100% of the capital of the “South project” belongs to Bank “Russia”. Chairman of the Board of Directors of the Bank is a Russian businessman Yury Kovalchuk, who is considered a business associate of Russian President Vladimir Putin. We are talking about the fact that Kovalchuk is in the “inner circle” of Putin and the function of the “cashier” for the Russian leader.

In 2014, the businessman was included in the sanctions list of the United States because of involvement in the occupation of the Crimean Peninsula. The sanctions hit and Kovalchuk Bank “Russia”.

“Depreciation on the plant is about 60-70%. The company’s modernization needs of 1.2 billion rubles. Because of the nature of the legal form it has to give 50% of profits to the budget. What remains is insufficient to implement the modernization plan. To get money from the owner, it is problematic to speak about the borrowing of large credit institutions is difficult,” – said the “Ministry of agriculture” invaders.

We will remind, builders completed the Assembly of the spans of the road part of the bridge from Russia to the annexed Crimea.