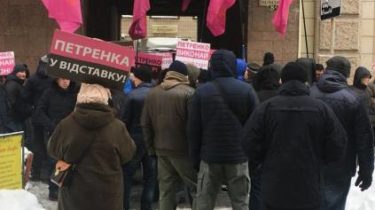 The leader of the “Socialist party”, people’s Deputy Sergey Kaplin and supporters of his political force broke into the office of the Minister of justice Pavel Petrenko. From the building of the Ministry of justice of the people were expelled by the security forces.

The videos shows how a group of people first made his way to the Ministry of justice building, then tried to enter the office of the Minister Petrenko. Some time they were unable to open the door or find the key, but soon Caplin with supporters was in the office.

Subsequently to a scene there arrived militiamen who were trying to get the audience to leave the Ministry building, but was met with resistance. After police managed to bring people from the Ministry of justice, some members of the “Socialist party” activists were detained and taken to the police station.

Activists and Kaplin for some time blocked the car of the law enforcement officers of detainees, but they are still taken to the Shevchenko district police station. Sergey Kaplin went with them.

According to him, representatives of the “Socialist party” came to “accept” the Minister of justice in order to unblock the work of the party. It requires of its representatives in the regional councils, ministries and the like.

Videosto such, the people’s Deputy Sergey Kaplin and where did he get such a condition