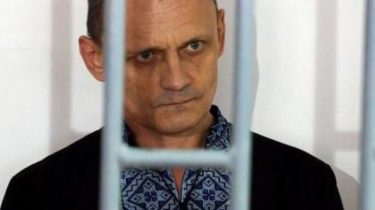 Russia, for unknown reasons, did not want to give Ukraine political prisoners Stanislaus Cliche, Nicholas Karpuk and Alexei Chirniya being held in places of imprisonment of Russia.

This was announced on his page in Facebook wrote the Deputy Minister of justice Sergei Petukhov.

“Russia refused the transfer to Ukraine of Cliche, Karpyuk and Chirniya without specifying the reasons and the relevant court decision. Before had been a failure in the transmission of Sentsov and Vygovskogo”, – he wrote.

According Petukhov, Russia’s actions are a violation of the terms of the Convention on the transfer of sentenced persons of 1983.

“We turned to Russia with the requirement to fulfil in good faith their international obligations. While the ongoing politically motivated persecution of Ukrainians in Russia, should act with personal sanctions, and Russia can not be returned to the international platform from which she was excluded”, – he concluded.

Russia refused the transfer to Ukraine Klich, Karpyuk and Crna without specifying the reasons and the relevant court decision. …

Recall the case Karpyuk and Cliche fabricated by the Russian investigative Committee and it appears the former Prime Minister of Ukraine Arseniy Yatsenyuk. Lawyer Ilya Novikov released new details about, in his words, “this sordid history.” In it Russia officially declares that in ‘ 94 Yatsenyuk was nicknamed “fighter Arsen”, fought in Chechnya against Russian troops with Alexander Muzychko known as Sasha White, and former head of the Lviv organization UNA-UNSO Andriy Shkil and, in fact, now defendants in Chechnya Ukrainians – Karpyuk and Klahom.

Russian prosecutors demanded to put Karpuk at 22.5 years, and Cliche – for 22 years. On 19 may 2016 , the jury recognized Karpuk and Klich guilty. Protection of Ukrainians believe that the jury was pressured. The Ministry of justice stated that immediately after sentence begins the procedure of extradition of the Ukrainians.