Ice danger for Kiev: the capital of the icicles already injured 12 people 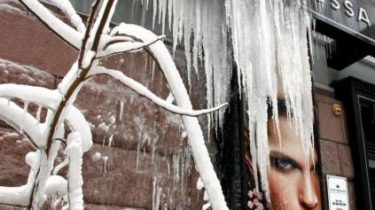 Twelve people were injured in two days from falling icicles in the capital, among them a small child. Through regular changes in temperature and ice blocks falling from the roof directly on the heads of passers-by, and responsible person traditionally block the sidewalks and wait until everything melts, according to a story TSN.19:30.

Icy garlands look beautiful and creepy at the same time, and every day becomes even greater. The people at the doorways, over which hang these blocks, moving dashes. Residents of homes in residential areas of the capital complained that the utility was only able in some places to pull the protective tape – and not very caring about alternative ways for pedestrians. “Crazy people have? Took blocked – and then what?” – outraged citizens who are moving on the sidewalks, despite the forbidden signals. Most people are annoyed that no one dangerous icicles no knocks. Some retirees because of the threat generally trapped in their own homes because they are afraid to go outside.

12 people were injured in two days by falling icicles in the capital. Among them a small child. Through regular changes in temperature and ice blocks falling from the roof directly on the heads of passers-by. The utility traditionally block the sidewalks and wait till it melts. 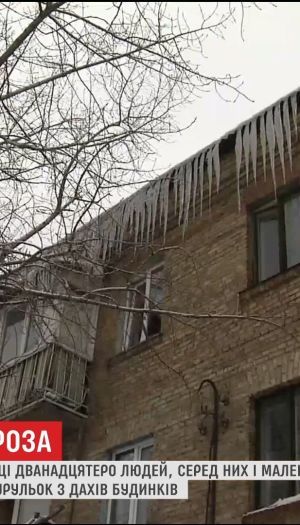 Under the law, to knock the icicles from the roof should the owners of the buildings, and to do so they must as soon as possible. So according to the Department of public works and threaten the culprits with fines of individuals from 340 to 1360 UAH, and to legal entities and officials from 850 to 1700 UAH. “What they put there, will protect home and wait until spring, that never works – they need as quickly as possible to take them out,” warned improvement. Tomorrow, under forecasts of weather forecasters, in the capital warmer, so the ice danger overhead will grow.

Veletanlic of Buruli to trewat Dahi , a car in CIV

At the beginning of the year in Kiev for newboro accountable areas during the snowfall was composed of nearly five hundred reports for an administrative violation. This was stated by the Director of the Department of urban development and the preservation of the natural environment of the Kyiv city state administration Andriy Fishchuk. “During the first half of January, the inspectors of improvement, including at the district level, carried 4.5 thousand instructions on elimination of violations, that is, to clear the key approaches to the objects of the social sphere”, – he said.