A bright show was presented by the organizers of events in honor of the completion of the Year of Japan in Ukraine. The night before, on St. Sophia square light performance, says the story TSN.19:30.

The image was projected on the bell tower of the Cathedral, which became the screen, and at some moments seemed to move and change. In the Windows of the building z avillia samurai and Cossacks, and the whole height of the building was covered with a variety of video images. The audience saw and trembita, and geishas, and sumo wrestlers, and soldiers of the ATO and the like. Not less strange was the music, which combines, in particular, Japanese military marches and the Ukrainian “shchedryk”.

Spectacular light show of the sky in Australia, took video of the spider web of lightning

Witnesses the spectacle is not left indifferent. “The house as if he was moving he lived”, – shared their surprise the people of Kiev.

3D projection output at Sophia Church in honor of the completion of the Year of Japan in Ukraine. The effect of a change in images projected on the Church is impressive. A video about the combination of Ukrainian and Japanese cultures are repeated every 20 minutes. 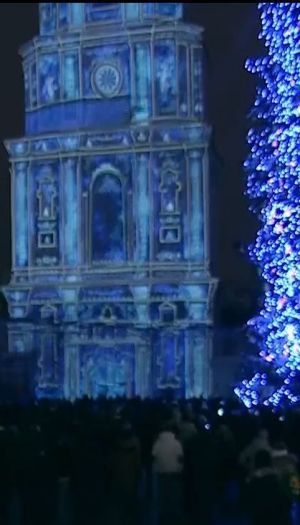