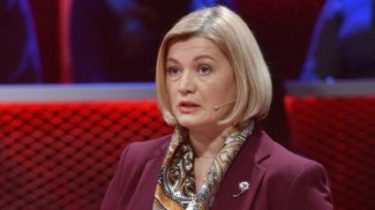 27 Dec should be the exchange of hostages – the militants agreed to release 74 of Ukrainians, and Ukraine – 306 fighters. At the same time, the terrorists claim that they hold 97 Ukrainians. Data SBU indicate that the figure is two times higher than – 170.

This broadcast “112 Ukraine” said first Deputy Chairman of the Verkhovna Rada Iryna Gerashchenko at the meeting with the President. The new figure is called the head of the SBU Basil Gritsak.

“It is those citizens whose relatives or sister appealed to the security service. But not all citizens representatives ORDO confirm that they hold. Today, they confirm only 97 people, including those who have installed the seat, 74 citizens, will be released on December 27,” – said Gerashchenko.

She added that the President instructed to provide the liberated Ukrainians, medical assistance, and promptly take them to their families.

We will remind, the exchange of hostages by the formula “306 74” will be held on Wednesday, December 27. Time and place of exchange not reported for reasons of safety. Ukraine will give the rebels those persons, the release of which is not contrary to the law.