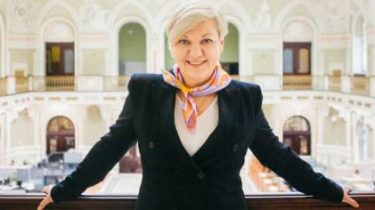 The head of the national Bank of Ukraine Valeria Gontareva, which is already half a year does not go to work because I wrote the application on dismissal, and it did not fire, declared an income of 83 million 582 613 thousand UAH.

This is stated in the Unified state register of declarations of persons authorized to perform state functions or local government.

Gontareva stated that he had received income from alienation of securities and corporate rights the ICU Holdings Limited (a company registered in the British virgin Islands).

We will remind, before the appointment of the Chairman of the Board of the NBU Gontareva sold its stake in the company. Schedule of cash payments for the shares was divided by five years.

The ICU group was established in June 2006, provides services in securities trading, investment banking services and manages assets of collective investment institutions. It is composed of LLC “Investment capital Ukraine”, AMC “Investment capital Ukraine”, the Bank “Avangard” and the AMC-APF “Troika Dialogue Ukraine” (all – Kiev). About it writes “Interfax-Ukraine”. Previously co-owner and Chairman of the Board of Directors of the ICU group was Valeria Gontareva, which, on the proposal of the President of Petro Poroshenko in the Parliament in June 2014 has approved for the position of Chairman of the NBU.

After the sale Gontareva shares in the ICU main partners of the group remained Makar Pasenyuk and Konstantin Stetsenko with a share of 41.7%, and Alexander Valchyshen, and Volodymyr demchyshyn (led by the Ministry of energy and coal industry of Ukraine), which belongs, respectively, of 6.58% and 9,99%.