“Asked again : is This for us? Is that true?” Gerashchenko told about the meeting released Ukrainians in Donbass 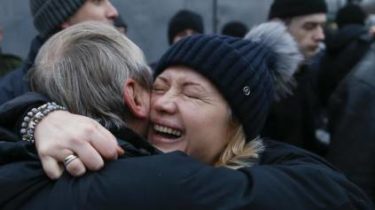 First Deputy Chairman of the Verkhovna Rada Iryna Gerashchenko described in Facebook meeting with Ukrainian released sardonically, which was held yesterday, January 27, at the Donbass.

“This experience, from which lump in my throat. The name of the city in which I visited many times before the war flag of the defunct “Republic” really is a torn piece of Ukraine. Around the armed men in another form, and pressed to the paddy wagon, which sat out the last few hours in the occupied territory. Looking at the faces, who know tlicy at the photos of their relatives, look in the eyes, knowing how they worked and mentally processed it all the time. Around – people with arms and “journalists” of “life”, – she told about the atmosphere during the hostage exchange.

Near the contact line is a terrible Internet. And yesterday it was not. I knew that everyone is waiting for the news that we were gone…

“The most worried in the first minute of the match, when our, after their suffering, stand stone, their faces as from a cliff … and then in the “Snow Queen” the first tear, and they’re not ice”, – shared his emotions the first Vice-speaker.

She also described the experiences of former hostages of terrorists from the new uniforms, which they changed after release.

“Most of all I love the moment of transformation when wearing a military uniform and in the eyes of not just confidence and a great desire to return to Gorlovka. With the world! Not with the war, which brought to Ukraine. Yesterday the boys so achingly, dressed in brand new uniforms, they, the wounded, the terrible winter of 2015, when our army looted and destroyed, naked and barefoot, dressed more volunteers have not seen these new building. “Oh, the Velcro on the pants! Convenient! The strap is not needed!” “Great boots!”- happy, and we with them”, – wrote Gerashchenko.

“In Kharkiv they cried again – in a different way than in Gorlovka. There still didn’t believe, couldn’t believe it! They went to the military guard which they honorably met, and asked again: is this for us? Is this true? And in Kiev they did not hide emotions. Holiday! So the country needs,” she added.

Military to the Central hospital, civil hospital of the state administration Affairs and to the hospital in Feofaniya. That is so distributed is exempt hospitals. Fighters take tests and conduct the examination. According to doctors, the condition of ex-prisoners is satisfactory. The biggest problem is the post-stress condition.