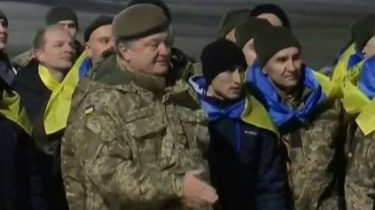 German Chancellor Angela Merkel and President of France Emmanuel macron helped to liberate Ukrainian hostages from the captivity of militants.

This in Kharkiv during the meeting, released from captivity of Ukrainians was declared by the President of Ukraine Petro Poroshenko.

“I would like to thank our partners in Normandy format – in France and Germany. German Chancellor Angela Merkel, who, when it seemed that he already did the exchange, doing everything possible to today became possible. The President of the France Emmanuel Macron, who by his decisive action and as part of the Normandy format, and separately did everything possible to bring Ukrainians home, as foreseen by the Minsk agreements,” he said.

Poroshenko also noted the participation of the Ambassador of France and the representative of the German Embassy in meeting Ukrainians liberated.

Recall, December 27 at the Donbass was held this year’s first exchange of prisoners between the conflicting parties in the Donbass. The Ukrainian government gave the separatists 233 people, and controlled Kiev territory returned 73 hostage.