Experts have calculated how much money Ukrainians are ready to spend on Christmas table, gifts and entertainment 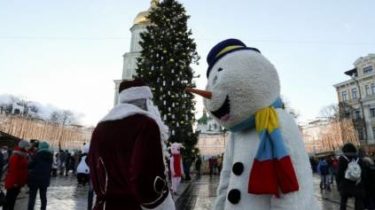 Experts estimate that the new year’s holiday this year will cost the Ukrainians on average in 1659 UAH.

In particular, food on the Christmas table are willing to spend UAH 806, gifts to relatives and friends – 769 UAH, other holiday costs and entertainment – UAH 721. That is, the program max is 2296 UAH. However, many of the respondents will spend only one or two points. Therefore, the average amount left is less. For example, 27% of respondents have planned their new year costs three counts, 30% – two (most often on the holiday table and for gifts), and 17% for a single article (as a rule, these costs are planned for the holiday table). This is stated in the December opinion poll Research & Branding Group.

About a quarter of the population of Ukraine, or have not yet determined the projected costs for the New year, or not at all intend to spend money on occasion. About three quarters of respondents have already made more or less clear view on upcoming costs.

Sociologists say that the amount of expenditure is very conditional, reflects some Central tendency in the planned Ukrainians festive spending. In reality, the size of these costs will have significant differences in different families. For example, half of Ukrainian families who plan to carry out the new year expenses, planned on is less than 1250 UAH. Moreover, 10% of the poorest Ukrainians total Christmas spending is projected at a level that does not exceed 375 UAH and 10% of the richest of them are these expenditures will amount to more than 3.5 thousand UAH. 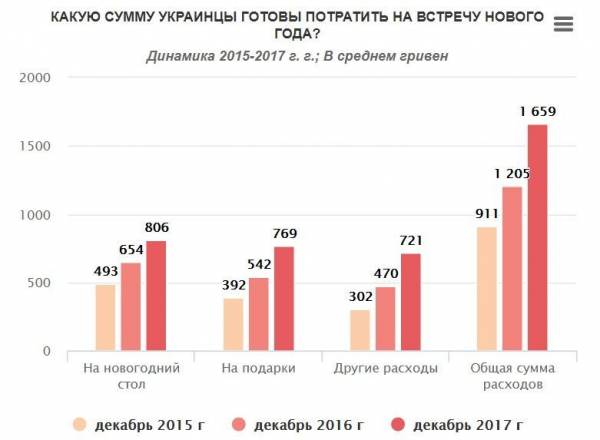 The total amount of planned Christmas spending Ukrainians related to their age, level of education and region of residence. For example, the lowest overall amount of Christmas expenses discovered in individuals aged 60 years and older (1020 UAH) and 50-59 years (1519 UAH). While the highest values of this indicator were observed in the age groups younger than 50 years (within 1900-2060 UAH). With increasing level of education of respondents was observed and some increase in the level of total expenditure that they intend to do in the new year holidays (from 1018 UAH in persons with incomplete secondary education until 2111 UAH from persons with higher education). The lowest average level of planned expenditure was recorded in the southern region (1311 UAH) and highest in the Eastern (1730 UAH) and the Central (1945 UAH).

The interview was held 4-14 December 2017. 1801 interviewed respondents aged 18 years and older. Sample representerait the population of Ukraine by sex, age, type of settlement and region of residence (with the exception of uncontrolled territories of Donetsk and Luhansk regions, Crimea and Sevastopol). Method of research – personal formalized interview (face-to-face). The maximum sampling error does not exceed 2.4%.

In Ukraine will rise in price, increase and change from January 1, read on Dnia this link.