“The conflict is not frozen.” The German foreign Minister made a statement regarding the Donbass and flies to Ukraine 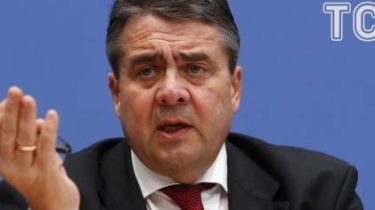 Foreign Minister of Germany, Sigmar Gabriel did not consider the situation in the Donbass frozen. On the contrary – there is a possible escalation of the conflict “fire”.

This is stated in the statement of Gabriel, which is available on the website of the German foreign Ministry.

“Last year we witnessed the greatest months since the signing of the Minsk agreement, violence in the East of Ukraine. In the Donbas is still a lot of shots. The region has a lot of heavy weapons,” – stated the Minister.

He drew attention to the fact that the recent mass exchange of hostages and agreement on new year’s-the Christmas truce (which the militants are still not fully adhere to) give some encouraging signals.

“We need to continue. So today I am flying to Kiev and tomorrow in Mariupol to show people in Ukraine: we will never leave you in the lurch. For us, this conflict is neither frozen nor forgotten. On the contrary – it is very relevant and fire. We will do everything in order to find a solution to the crisis that finally brought peace to the region,” assured Gabrielle.

In Ukraine, in particular, he will have talks with Minister of foreign Affairs Paul Klimkin and representatives of the observation mission of the OSCE in the Donbas. Also scheduled to meet with high-ranking officials of Ukraine will speak about reforms and fighting corruption.