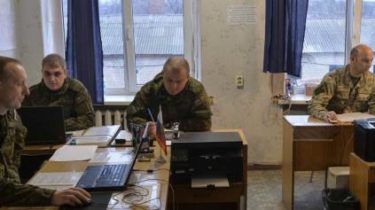 Germany will try to persuade the Russian government to return revoked by officers from the Joint center for control and coordination of questions of ceasefire in the Donbas.

This was stated by the foreign Minister of Germany, Sigmar Gabriel, says UKRINFORM.

“It is very important to convince the Russian government to Russia again participated in joint Commission (SCCC – ed.) and it is important that Ukraine had direct contact with Russia in this regard. We want to convince Russia to do with Ukraine, to the Russian officers were canceled and they returned to the composition of the Commission,” said Gabriel.

He drew attention to the fact that Russia, on the one hand, proposes to introduce a UN peacekeeping mission in the Donbass, and on the other is withdrawing their officers from SCCC. According to the Minister, a “characters” that are not suited to each other.

Answering the journalists ‘ question about a possible replacement in the Russian JCCC officers to representatives of other countries, in particular Germany, Gabriel said that the purpose of the Commission is to provide a direct link between the Ukraine and Russia and not to avoid conflict, and to stop those that arise.

As previously reported, December 19, all Russian officers who were part of the Joint center for control and coordination of questions of ceasefire and stabilization of the situation (SCCC), crossed the border with Ukraine at the checkpoint “goptovka” and returned to Russia. The next day at the meeting of the trilateral contact group in Minsk, the representative of the Russian Federation officially declared that Russia is ready to return its military observers from the Joint center for control and coordination of ceasefire in the Donbas.