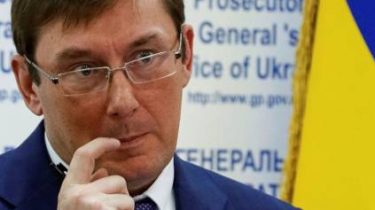 The Prosecutor General of Ukraine Yuriy Lutsenko and the President’s representative in the Verkhovna Rada, MP from the faction “Block of Petro Poroshenko” Irina Lutsenko declared a gift from son Alexander.

In connection with changes in property status that officials have made their declarations in the Unified state register of declarations, 2 January 2018, each of them received a gift in kind worth 170 thousand hryvnias from Lutsenko Alexander Yu.

Later Lutsenko commented on her son’s wedding, which is staged in a luxury country club Queen Country Club near Kiev. After all, under the head of the GPU on the exposure to the bribery of two judges from the Dnepr user Sergey Malchuk posted the video with the investigation of journalists “Schemes” on the occasion of the wedding of the son of genprokurora. Reporters noted that the official car of the General Prosecutor’s office allegedly drove the makeup artist of the bride. Also in the video it was said that the moth used to transport the gifts to the newlyweds.

In turn, the youngest son of the public Prosecutor 2017, enrolled in the Institute of international relations of national Taras Shevchenko University. In an exclusive interview with TSN Vitaly Lutsenko admitted that the whole year was preparing for the EIT with Tutors, but was able to act only on the contract form of education, and that 46 thousand hryvnia per year.