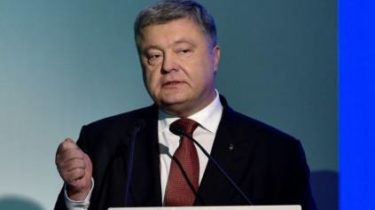 A consequence of the economic blockade of Donbass was the loss of Ukraine about one percent of GDP growth, which will amount to at the end of 2017, more than two percent.

This assured the President of Ukraine Petro Poroshenko in his column for a special issue of the journals “modern times” and “The Economist “the World in 2018”, which was published on Saturday, January 6.

Videogramas, said that the economic blockade of Donbass threatens Ukraine with devastating consequences

He also said that, according to the National Bank of Ukraine, “initiated by Jingo economic blockade of Donbass brought to 2.5 billion US dollars of net losses in the trade balance of the country and provoked a stagnation in the industry.”

In column Poroshenko spoke about their initiatives to improve the investment climate. In particular, he suggested that instead of a tax on profits a tax on the capital.

“This will free up funds for business development, because the tax will affect only the portion of profit which is aimed at the expansion or establishment of industries. We hope that this innovation will run from 1 January 2019,” – said Poroshenko.

He also urged the government to extend the moratorium on inspections of small and medium business. “Big business and the rich citizens survived the crisis thanks to the strength of the stock accumulated in previous years. The poorest state was backed up by subsidies. But the middle class paid for everything myself out of pocket,” said the President of Ukraine.

He reminded that Ukraine must earn the State Bureau of financial investigations, which will deal with combating crime in the sphere of economy and Finance.

The economy slowed growth after blockade of the occupied Donbass. Results and forecasts of the NBU

As strategic development objectives of the country Petro Poroshenko reiterated the EU membership and NATO membership, noting however that “the prospect is clearly not 2018.”

Recall that in early 2017, activists staged a rail blockade on Donbass. They missed the train with coal from militant-controlled territories, because they considered unacceptable trade with the occupiers. Their requirement is not only to stop the trade, but also to formally consolidate the territories that they control the aggressor, the status of the occupied.

March 15, 2017 held an emergency meeting of the Council, which was the culmination of a tense situation by blocking ORDO. The national security Council took the decision to stop trade and transport links with the occupied territories.

The President of Ukraine Petro Poroshenko said that the organizers of the blockade of trade with the occupied Donbass didn’t want the negotiations to control the movement of goods, but only PR. In his opinion, the blockade has created a way not only to capture the Ukrainian private and state-owned enterprises, but the justification of their transfer to the oligarchs-the fugitives or Russian oligarchs.

Later, the Minister of Finance of Ukraine Alexander danyluk said that the possible loss of the Ukrainian economy from blockade of trade with the occupied territories of Donetsk and Luhansk is estimated at 1.3% of GDP.