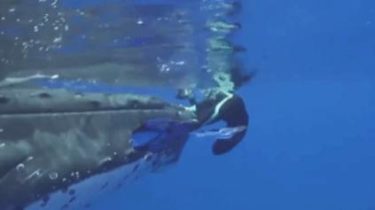 At Muri beach on the cook Islands, which is located in the southern part of the Pacific ocean, a giant humpback whale weighing more than 22 thousand pounds saved a marine biologist Nan Hauser from the shark.

On video published by The Daily Mail, seen as kit hides the diver under her fin, hiding him from the approaching tiger shark. In this position, he “took” Nana to a safe place.

As later told by Hauser that the incident occurred back in October. According to him, the “rescue mission” is proof of the intuitive nature of the whale to protect other species of animals, including humans.

Hauser also noted that scientists have seen cases where whales protect other species, but this was the first recorded occasion when they saved the man from sharks.