Nativity scene in the hot spots. ATO soldiers were congratulated with the Christmas of their fellows 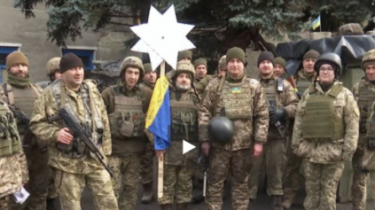 Nativity scenes in the ATO zone was somewhat more restrained than in peaceful Ukraine, but the feast their military comrades still staged, according to a story TSN.19:30.

At the Christmas Nativity in the occupied Crimea sang Ukrainian carols

To congratulate the children, soldiers, carolers were preparing for a week. Wrote the script, did the star of Bethlehem, under which fluttered the blue-and-yellow flag.

Carols were six in number, two shepherds, three wise men, who spread the news around the world, and the angel that this news brought.

The Nativity set was somewhat more restrained than on a peaceful Ukraine, but the celebration of his own military comrades still staged. Sang with a homemade costume, a small part, but the canons kept. In the extreme nose sing a bit more restrained, after all one ear for Christmas carols, another to hear the movements of the enemy. 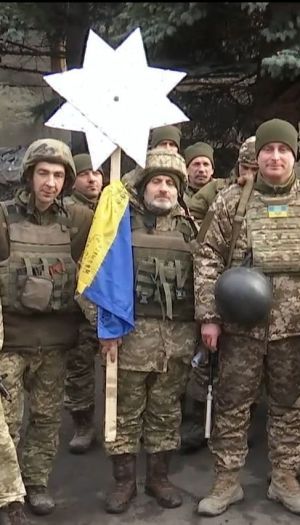 The script is adapted to the area of the ATO. He is very short and dense. The program was designed for exactly 5 minutes, to and fighters from Affairs not to distract, and time to get around all the strongholds.

In the costumes of the carolers was an army minimalism. The crown of the wise is made from a material parobarer used in the trenches. But about the costumes had to forget, when they came to the line of collision – there are carolers dressed in the outfit.

In the extreme nose sang in a more restrained manner, because one ear for Christmas carols, another to hear the movements of the enemy. Before the armistice there was wounded, the military people do not relax.

As previously reported, Christmas day was the first day since the beginning of the year that has passed without attacks on the front line.