Rossm shown, what ships Putin decided to return to Ukraine 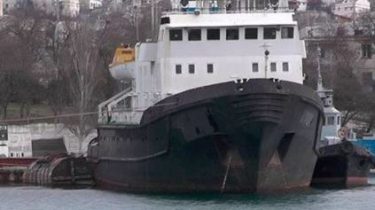 The footage shows that after the occupation of the Peninsula in poor condition – rusty. Among them, sea movers “Chernigov” and “Cherkasy”, the submarine “Zaporizhia” and tug boat “Kremenets”.

“A goodwill gesture”. Putin has explained, why has decided to return to Ukraine military equipment from the Crimea

As previously reported, on January 11, Russian President Vladimir Putin said that Russia is ready to give Ukraine the military ships that remained in Crimea after the occupation of the Peninsula.

According to the commander of the naval forces of Armed forces of Ukraine Igor Voronchenko, at the time of the annexation of the Crimea Peninsula were eight Ukrainian warships. Of these, only the large landing ship “Konstantin Olshansky” was not on the move – he needed repair of the main engines.

The foreign Ministry of Ukraine stressed that work on the issue of the return of Ukrainian ships, because the proposal has many aspects. In turn, Prime Minister of Ukraine Vladimir Groisman said that the vessel will return together with the occupied Peninsula.

First Vice-speaker of the Verkhovna Rada Iryna Gerashchenko and the Chairman of the Majlis of Rafat Chubarov rejected the proposal of Vladimir Putin, who said about a possible return to Ukraine of military equipment that Russia seized the Peninsula. According to the Russian President, ships, Armored vehicles and aircraft in poor condition, because they after the annexation did not serve. However, in the Navy of Ukraine claim that the majority of Ukrainian art, which fell into Russian hands, it was repaired.