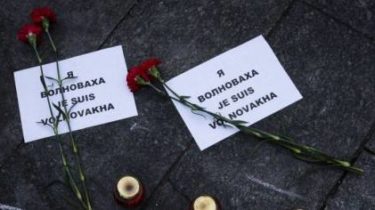 Today, January 13, terrorists in the occupied city of Dokuchaevsk of Donetsk region on the walls of buildings there were leaflets with a reminder of the shooting by militants of the regular bus near Volnovakha.

This was reported in Facebook by TSN correspondent Andrew Tsaplienko.

“The battery shot from Dokuchaevsk. The occupied city. The bus 12 people were killed, 18 were injured. We remember this day. But, it turns out, not just us. Today in Dokuchaevsk, which controls the “DNR”, there were these leaflets. With apologies to the crime crime. A reminder of who did it. On whose hands the blood of his countrymen,” wrote he, adding to the post three photo evidence.

Tsaplienko added that cards had a lot: they pasted on the walls of buildings in the city centre, and “Dnrovcy” hastily tried to disrupt them, but some have managed not only to read, but to photograph.

“Who risked their lives to hang these flyers? Perhaps Pro-Ukrainian partisans in the occupied territory. And maybe just ordinary people. Which for many years waiting to return to Ukraine. And I remember everything.”, the journalist added.

As previously reported, on 13 January 2015 near Volnovakha was a terrorist attack, which killed 12 people and injured another 18. From Dokuchaevsk terrorists fired 88 unguided missiles, some of which hit the bus with civilians. GPU found that the operation was headed by the military Commissar of the Penza region of Russia, Colonel Anatoly Sinelnikov and a citizen of Ukraine, the so-called “military commandant of Dokuchayevsk” Yury Shpakov.

Videogo called involved in the terrorist attack under Volnovaha January 13, 2015