Mine workers in the Donbass refused to start work 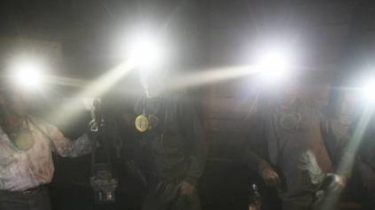 Today, 15 January, the miners of the first shift of the mine “Ukraine” SE “SelidovUgol”, which is located in the town of Ukrainsk of the Donetsk region, refused to start work. They demand to extinguish debts under the salary – part Nov for Dec.

This was announced by the Chairman of the primary trade Union organization of the Independent trade Union of miners of Ukraine Ivan Chukov.

“Well, and for utilities to pay and families to feed, clothe and shod, and no money. Last week, alms, gave 400-500 UAH. And what can they buy? It is surprising that the mine production schedule performs, and coal the same kind of implements. And funds for wages, there is no reason,” – said Chukov.

The Chairman of the primary trade Union organization believes that the initiative of the first shift will support colleagues from the second and third shifts.

“The problem all the same. The miners want to attract attention, and the other way, besides refusing to go down to the slaughter, they do not see,” – said Chukov said that the General Director of the company for issues on mine went to Kiev.

“If you come up empty, you will have the capital to go the angry miners,” warns Chukov.

We will remind, in the autumn of Volyn miners refused to rise to the surface through many months in arrears in the payment of salaries.