The main Christmas tree of Ukraine will sell for Souvenirs. The tree, which was decorated with a Christmas village in Sofia area, todaythis half a day to completely disposed of, it is spoken in TSN plot.16:45.

Just in the middle of Sofia area – bare trunk and a bunch of heavy equipment. The deck yesterday was decorated with a star. Branches of the main tree of the country is crushed by a special machine in cod. During the process of watching Anton and Misha. Dad brought them to see how to dismantle the tree. Kids say they are sad. So sad Sergei. He was one of the organizers of the celebration on St. Sophia square. Personally went behind the tree, Ivano-Frankivsk region and then a month and a half was sure that she was all right.

In just half a day from the Christmas tree on St. Sophia square was almost nothing left. Even the branches already disposed of. Just on the area of the trunk is cut into discs. The first gave to journalists, others plan to distribute to artists to paint, and in the spring to sell at auction. 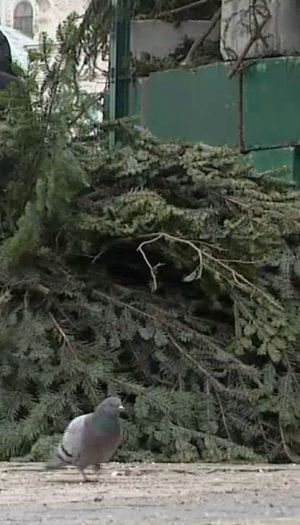 Sergey manages the crane, which was customized to utilize a five-ton barrel. Only half a day and from the Christmas tree on St. Sophia square was almost nothing left. Even branch had disposed of. But with the last piece of the trunk has the problem. They say he was just frozen at the base. It is trying to loosen a tap, but he wouldn’t budge. In the end, it just cut out under the cheers of the workers.

Just on the area of the trunk is cut into discs. First give journalists, and others – they will be somewhere in the 500 – plan to distribute to artists to sanded and painted, and in the spring to sell at auction. Hope to bargain for 100 thousand hryvnias, they will transfer Frankivsk forestry. Shredded branches would be transported to the capital’s squares and is used for the insulation of plants. After a day or two, say the organizers, on the area and not a trace will remain from the feast.

Svetlana with her granddaughter Vika upset. They only last evening arrived in Kiev from Lviv. In particular, and in order to see Christmas town. But they already have a plan to come next year.