In the US, thrown from the third floor of the child caught fire 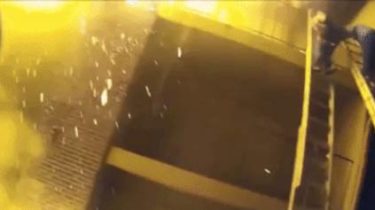 The extraordinary incident occurred in the U.S. during a fire rescue caught the child, whose father threw him off the ladder, writes the New York Post.

That day Scott Stroup of Georgia became a hero because the rescue of the child was recorded by the camera one of his colleagues attached to the helmet.

In the video you can see how the fire catches the little girl abandoned by his father from the third floor of a burning building. After that, the rescuer takes her to a safe place.

It is noted that on that day it was not the only similar case.

“We caught the kids, just like in football. On the balcony was the adults who threw them right into our arms. We had some firefighters who caught the babies, so it was just incredible,” said the captain of rescue brigade Eric Jackson.

The fire at the Odessa camp: following the extension of the term of arrest of ex-Director went on a hunger strike

We will remind, recently in the Kyiv region in the burning house killed a child and his grandfather. Neighbors blame parents of a little girl who, like, got really drunk and could hardly stand on his feet.