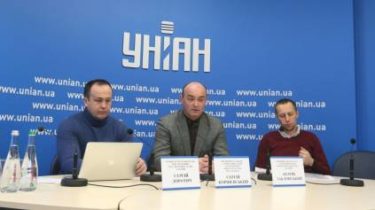 22 Dec 2017 Kyiv city state administration through the newspaper “Khreshchatyk” declared carrying out of investment competition “a Complex of measures on improvement and development of public transport in the city of Kiev”. The competition put the spot 994 (28 lots), half of which went into three mega-lot, where the most commercial stop.

Preparation of competition conditions and the decision on its carrying out was carried out in secret, without public debate, without the involvement of the public and stakeholders.

In addition, when the preparation of the competition responsible departments of the Kyiv city state administration did not take into account the interests of small and medium-sized businesses and decided to dismantle the 872 bus stop complex existing investors.

At a press conference, which was held on 16 January 2018 in UNIAN Sergei kornievskiy, President of the Association “Union of investors of the transport infrastructure of Kyiv city”, said that the proposal to suspend the competition and to negotiate a settlement with the owners of existing bus shelters the Kyiv city state administration does not react. Therefore, it was decided to convey the position of entrepreneurs to the leadership of the Kyiv city state administration through the media. In his opinion, actions of structural subdivisions responsible for organization and implementation of investment competition are unskilled and violate the rights of entrepreneurs. Small businesses unable to Finance the proposed mega-lots that are stated on the competition.

Sergei dorotich, Chairman of the Public Council under the State regulatory service of Ukraine, noted that the list of lots of strangely shaped: “the decision was made, we believe, in favour of certain third parties. Why go through the formation of large lots? The logic to get the maximum price, need to sell more lots. Must be observed the procedure on regulatory policy. Such solutions kill the investment potential of Kyiv. The investor there is no certainty that the rules will not change in the future.”

The Association “Union of investors of the transport infrastructure of Kyiv city” appealed on behalf of entrepreneurs to the mayor of Kiev Vitaly Klitschko on the illegal situation that has developed in Kiev at carrying out of investment competition, with the following requirements:

to suspend the carrying out of the declared investment competition and shift the timing for the second half of 2018 .;

– disable the removed bus shelters that have been set for investment contracts with KP “Kyivpastrans”;

– to establish a working group for the development of alternative conditions of investment competitions with the inclusion of representatives of public organizations and owners of bus shelters;

– conduct a new investment contest based on criteria developed by the working group and agreed by all stakeholders;

– when the new conditions of competition is necessary to consider that existing owners of bus shelters was a priority for the conversion stops designs modern arhetipov.