“We exchanged lists.” Became known the first results of the current negotiations on the Donbass 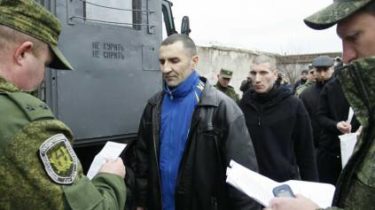 In Minsk, representatives of Ukraine and the militants, who seized parts of Donetsk and Luhansk regions, has made the exchange of lists of detained persons during the first of the current negotiations.

This was announced on his page on Facebook press Secretary of the Ukrainian representative Leonid Kuchma Daria olifer.

“The release of the hostages is the main focus of the work of humanitarian groups. This year the sides have already exchanged the lists of detained persons. Believe that following the dismissal should take place promptly. We will continue to lobby for the initiative of the International Committee of the red cross to establish an international mechanism for the search of missing persons”, – she said.

According to burden, in 2018, the priority is a component of the Minsk agreements.

“Task #1 – ensure a comprehensive and sustainable ceasefire. The Ukrainian side will continue to demand the withdrawal of foreign military forces from the territory of Donbass and the return of NZF ORDO to the demarcation line established by the Memorandum of 19 September 2014”, – said the press Secretary of Leonid Kuchma.

In addition, the Ukrainian side demands to guarantee the security of the SMM, the OSCE and its full, unimpeded and secure access to all areas ORDA to “the mission fully to discharge its mandate and responsibilities in respect of continuous monitoring and verification of implementation of security aspects of the Minsk agreements.”

“In the socio-economic unit’s main focus is the return of the Ukrainian enterprises, which were illegally captured in ORDA in March 2017 and the abolition of all acts of the Russian Federation on the recognition of documents issued by the illegitimate authorities ORDO. In the framework of the relevant working sub-group will continue working to return under the Ukrainian legislation the debt for previously delivered by the resources, and the creation and maintenance of an international group of experts to study the environmental situation in natkonal the part of Donbass”, – said olifer.

In addition, the Ukrainian side expects meaningful discussion in the framework of the Trilateral contact group modalities return to Ukraine control of border with Russia in Donetsk and Lugansk regions.

“To this end, promote the creation of appropriate working sub-group”, – concluded the press-Secretary of the Ukrainian representative.

In 2018, the priority is a component of the Minsk agreements. Task #1 – inclusive and sustainable …