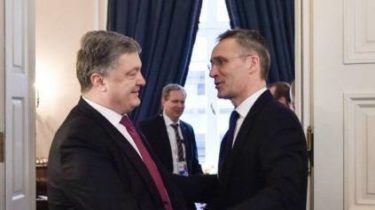 About it reports a press-service of Administration of the President.

Poroshenko thanked NATO for its consistent political support for the sovereignty and territorial integrity of Ukraine and important practical assistance in countering Russian aggression.

NATO’s doors are open for Ukraine and Georgia – Stoltenberg

The President told Stoltenberg about the situation in the Donbas and violations of the ceasefire by militants.

Poroshenko and Stoltenberg also discussed issues of further cooperation in the framework of the Commission Ukraine – NATO.

NATO and Russia have differences on Ukraine – Stoltenberg

Recall, Petro Poroshenko in the column for the special issue of the newspaper “Novoye Vremya” and “The Economist the World”, published on 6 January said that Ukraine’s membership in the European Union and NATO membership remains a strategic goal of the state, but it is the prospect of 2018.

“Membership in EU and NATO membership, of course, remain our strategic goal. Because this perspective is clearly not in 2018 and not our business, as the Scripture says, to know times and seasons, let me just say that I firmly believe in its realism,” said Poroshenko.

According to the President, the Association agreement with the EU is “a road map further fundamental changes that will bring Ukraine closer to the Copenhagen criteria for membership in the prestigious Union of the world.”