Poroshenko hour of talking with Tillerson behind closed doors. What is known about the negotiations 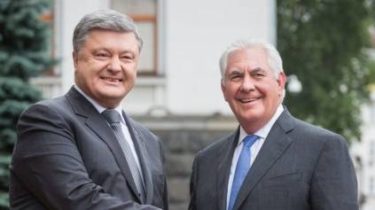 The President of Ukraine Petro Poroshenko has met in Davos with US Secretary of state Rex Tillerson. The talks lasted an hour. Talked about the war in the Donbas and the peacekeepers, the annexation of Crimea, Russian aggression, the sanctions of the West against Russia and the defense of US aid for Ukraine.

On joint coordination in security matters

“We agreed on joint coordination in security matters. I thanked the Secretary of state for the call when it was confirmed the granting Ukraine defensive weapons. Today we are already seeing new opportunities for cooperation in the field of defence and agreed to certain stages of this cooperation”, – said the President.

About the peacekeepers and the release of hostages and politicalimprisoned

“We have planned and agreed on a possible draft resolution on the peacekeepers in the Donbas with the key characteristics that should contain this resolution. We received the full support of the US, other partners on the UN security Council,” – said Poroshenko after a meeting with Tillerson.

The President noted that these issues were also discussed during the negotiations with the Dutch, the Polish colleagues on the forum in Davos.

“In my opinion, as a first step, it is very important if it is a standard peacekeeping mission of the UN security Council and I’m optimistic that this will take place in 2018. I, as the President of Ukraine and on my behalf of the Ukrainian diplomats will be to exert maximum efforts”, – assured Poroshenko.

“Of course, insist on continued discussion regarding the release of the other hostages and the release of political prisoners in prisons in Russia”, – said Poroshenko.

He also informed the Secretary of state about the processes that occurred during the liberation of the Ukrainian hostages and thanked for the assistance that was provided by the Ukrainian side in the process.

“We agreed that now this process will be continued”, – added the head of state.

On sanctions against Russia

Poroshenko thanked the Secretary of state for the sanctions, which are administered by the United States against Russian residents.

“I am confident that this policy is effective. It is important for us to have this mechanism of influence in order to bring Russia back to the negotiating table and provide the de-occupation of the Donbass and the liberation of the Crimea”, – said the head of state.

On the suppression of terrorism

Poroshenko said that thanked US for the help that was provided by the Ukrainian pilots in Kabul, where the attack occurred.

“This once again demonstrated our effective cooperation: employees were transferred and placed in a secure location; assisted in the identification of dead pilots and helped organize their return to Ukraine”, – said the President.

“This is very important because our cooperation and our trust needs to be demonstrated, including during terrorist attacks. Of course, coordination of our actions in combating terrorism will be better. We have agreed to cooperate in this direction”, – he said and expressed regret that during this attack killed three Americans.

The restoration of the strategic partnership Commission and economic cooperation

Ukraine and the United States agreed to resume the work of the strategic partnership Commission in March, when it will be 10 years from the date of its creation.

“I have no meetings. And, in March, the Commission held. Will be formed a few groups where we will discuss, including further reforms. We really need it”, – said Poroshenko.

In the framework of the Commission Ukraine, in particular, may invite relevant experts to provide expert help.

“Very carefully, we discussed issues of economic cooperation”, – said the President and stressed that increased investments by U.S. companies in the Ukrainian economy.

President Petro Poroshenko also already know the date, when Ukraine is due to arrive weapons from the United States.