The dollar was 35 and rabid inflation: the Ukrainians warned that waiting for the hryvnia in the autumn without the support of the IMF National Bank strengthened the hryvnia however , experts warn that this trend may last for long. The main factor of further developments in the foreign exchange market is the allocation of the IMF loan or the rejection of it, said in the story TSN.19:30.

The financial problems of the Ukraine became the topic of discussion at the economic forum in Davos, where he met President Petro Poroshenko head of the IMF Christine Lagarde. The Fund drew attention to the fact that reforms in Ukraine are stalled, and in the fight against corruption, Kiev began to take steps back. Therefore, the next tranche of the IMF held, while in Ukraine will appear the anti-corruption court, financial diet did not go to the benefit of local currency. When she pressed a little traditional for winter, the outflow of currency to buy energy, it quickly devalued.

Video”We’re going to talk about the rate of 35 and above”: experts told about the possible movement of the hryvnia

On the strengthening of the hryvnia, the NBU reports, but for how long – experts warn. Without life-saving infusion of money from the IMF, Ukraine will have solvency problems, admitted Finance Minister Alexander danyluk. In Davos, President Poroshenko stated that Kiev has fulfilled 80% of its obligation and is awaiting a new tranche in April. 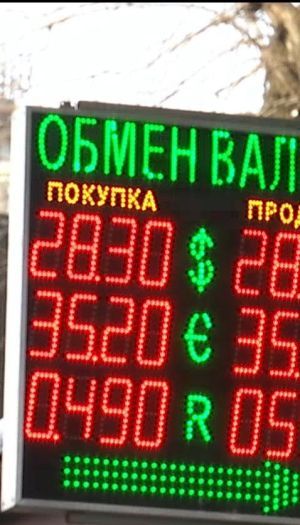 Today’s course is far from the limit of the possible fall of the hryvnia in 2018. Experts note that the national currency under certain circumstances to deviate significantly from the budgeted corridor. “If Ukraine does not resume talks with the IMF until the fall, then even 30 hryvnia per dollar seem to be the perfect solution, because then we’re going to talk about the course of 35 or above”, said financial analyst Eric Naiman. Without the IMF money Ukraine will have problems with solvency, has been acknowledged by Finance Minister Alexander danyluk. Therefore, the Ukrainian government, which almost broke the pots with the IMF, obviously, still have to take the claims of creditors.

After the weekend the dollar and Euro cheaper in the course of the national Bank. Infographics

In Davos, President Poroshenko stated that Kiev has fulfilled 80% of its obligation and is awaiting a new tranche. “Probably, fingers crossed, until April we will have a mission and we will get the next tranche. We, my government and my people, ready to continue cooperation with the IMF,” he said. The national Bank assured that the summer stabiliziruemost UAH, and in General, this year is expected from the IMF $ 2 billion. However, bankers admitted that inflation will be greater than predicted.

The index of big Mac: the dollar in Ukraine has to cost 8, 9 hryvnia

Meanwhile, the Economist magazine published the current so-called “big Mac index” and recognized the Ukrainian hryvnia most undervalued currency in the world. Although this index is comic, it still reflects the difference in the cost of things in the world. If the food is always worth the same, the dollar would have to cost about 9 USD. Cheapness of food is an indicator of low wages and low purchasing power of Ukrainians. Consequently, the economy is not recovering because there is no investment and the inflow of foreign currency, the reason why – the same corruption, economists say.