In Kiev, detained a suspect in the bloody murder near the metro station “Beresteyskaya” 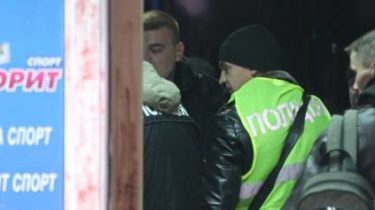 In Kiev, detained a suspect in the murder of a man outside the Camp.

This was stated by the head of the Main Department of the capital of Ukraine Andriy kryschenko, the TV channel “112 Ukraine”.

“A few minutes ago the gunman who committed this murder, was detained by employees of criminal investigation Department of the police of Kiev. He seized the weapon from which, we believe, the crime was committed. But after conducting examinations will be able to prove it”, he said.

In the center of Kiev near court shooting occurred, police announced the plan “Interception”

According to Krishchenko, with a prisoner, who is a native of Vinnytsia region, born in 1989, works in the security structure, and was previously convicted of theft, investigators are already working.

In addition, the head of the Kyiv police said that the conflict occurred because of two judgments that contradict each other and give the right of ownership of the premises where the murder occurred, in different hands.

“The owners of this building were divided among themselves. We are talking about civil litigation between the two owners. And one and the other the owner for the protection of buildings hired private security”, he added.

Earlier, unknown persons opened fire outside the Camp in Kiev, having shot a man. Another man was wounded. As it turned out, the conflict arose at the national lottery between the two security structures.