“Owners of Crimea”, Russian media found out who develops business in the occupied Peninsula 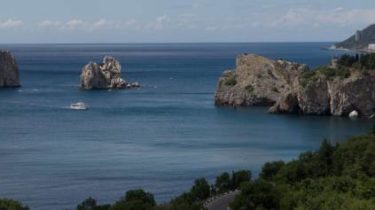 This is stated in the investigation of “Novaya Gazeta”.

So, the Russian billionaire friend of Putin Arkady Rotenberg that deals with the construction of a bridge across the Kerch Strait because of the desire “to contribute to the development of the country” believes that it will prove to be his “black mark” from the West. Only the bridge was allocated to 228 billion rubles, but how much Rotenberg will get as the profit allocated for the bridge, remains an open question. Moreover, the construction is related to a series of scandals.

Ecological threat: the construction of the Kerch bridge can cause the death of dolphins

Another large-scale Crimean project – the Federal highway “Tavrida” – involves “the kings of the state order”, the Russian oligarchs Valery Abramov and Viktor Perevalov. The cost of building the pipeline for supposedly new technology of road paving – 139 billion rubles, but now it is also impossible to determine what profit will the business. Moreover, with the construction of the highway fighting the inhabitants of nearby villages: they expect the demolition of houses.

According to “Novaya Gazeta”, in Russian-annexed Crimea is successfully developing the business, and the Minister of agriculture of the Russian Federation, which came under Western sanctions, Alexander Tkachenko. He, along with the close businesswoman Maria Lisitsyna became the owner of a large chain of supermarkets “PUD”, consisting of 63 stores and a net profit for the period 2015-2016 – 1.5 billion rubles.

“In October 2016, the newspaper “Vedomosti” reported that “the Agrocomplex name Tkachev,” preparing for the acquisition of agricultural holding “Akashevo” in Mari El. And in December, the flagship company of the holding “Akashevo” LTD “Poultry farm of Galevska” under the control based Lisitsyna, OOO “Agroaktiv”. The terms on which Maria Lisitsyna became the owner of “PUD”, previously recorded on Cyprus offshore Astrid Finance Inc (a company associated with Ukrainian businessman Gennady Butkevich), unknown”, – writes the edition.

Russian TV presenter and promoter Dmitry Kiselev which is under EU sanctions , is in Koktebel there is a cottage area of 120 sq. m. In August 2017, he expressed the desire to build a Golf club in a Quiet Bay, the most popular in the Crimea, the site of a wild vacation.

“What’s going on in a Quiet Cove? This is the wild tourism, which is environmentally friendly. It seems to me that all of this will need to learn. It seems to me that in the tranquil Bay of the beautiful landscape to the Golf course. The Golf course of 60 hectares, is the preservation of green space. It is a sport and a healthy lifestyle. I think that is a responsible attitude to nature,” he said, adding that also has plans for Fox Bay.

Despite the fact that Crimeans reacted negatively to the initiative, in the self-proclaimed administration of Feodosia are considering the possibility of building bays, and it is not only Golf courses but also hotels, restaurants and the like.

Among the Ukrainian oligarchs in the Crimea is actively involved in business Dmitry Firtash, which now living in Austria and is the owner of two companies: “the Crimean Titan” and “Crimean soda plant”. However, both companies have a lot of problems.

“The company “Titanium investment” in the lease which is the production complex of the plant, sued for bankruptcy. The plaintiff – Bank VTB. The lawsuit was based on nonpayment taken in 2015 of credit in the amount of $ 39.4 million” – the newspaper notes.

According to sources, “Novaya Gazeta”, even if the “titanium investment” become bankrupt, the work of “Crimea Titan” is not affected. At the same time, “Krymsoda”, one of the largest enterprises of the Crimea is subsidized, earning over 8 months of 2017, 350 million rubles of net profits, was under threat of closure.

In addition to Firtash, large-scale development activity has developed in the occupied Peninsula, the former Minister of defence of Ukraine, who fled to Russia together with Viktor Yanukovych, Pavel Lebedev. He owned a group of companies Parangon builds apartments and houses in Sevastopol and Evpatoria without the social infrastructure, but closer to the sea. Due to the number of buildings with Lebedev judged.

Remind, Russian occupiers of Crimea are stealing gas from the continental shelf of Ukraine in the Black sea. Platform guarded by armed men, who are called by fishermen.