In the center of Kiev KIA after the collision spread to the roof, the Boulevard paralyzed tube 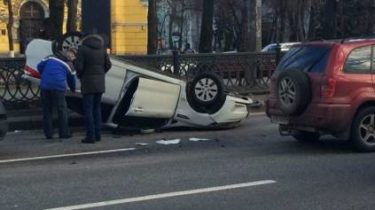 In the center of Kiev on Taras Shevchenko Boulevard, near the metro station “University” there is a serious accident with rollover.

This is reported by eyewitnesses of the accident.

As noted, has faced Toyota and KIA, the latter from the impact was thrown to the curb, then the car turned over.

According to preliminary data, there were no serious injuries. Now on the scene working law enforcement officers and physicians.

At the same time from-for accidents movement in the capital was paralyzed.

We will remind, earlier in Kiev the car was hit on the transition girl with a dog. As a result of hitting the animal died, the girl was hospitalized.