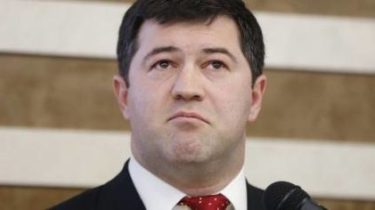 The Cabinet of Ministers adopted a decision to dismiss suspended from duty the head of the State fiscal service Roman Nasirov.

The decision was taken at a government meeting on Wednesday, January 31.

Mark, Nasirov is suspected of abuse of office and embezzlement of public funds in the amount of over UAH 2 billion. The consequence considers that Nasirov, acting in the interests of the Deputy Onishchenko, the “gas business” were arbitrarily granted a number of enterprises the possibility of tax liabilities in installments.

Earlier, Finance Minister Alexander danyluk has announced that it has submitted to the Cabinet a submission on the dismissal of the Chairman of the State fiscal service of the Roman Nasirov.

In turn removed from office by the Chairman of the State fiscal service of Ukraine Roman Nasirov called the submission to the Cabinet of the Minister of Finance Alexander danyluk regarding his dismissal illegal and gave him a statement of the offence.