In Kiev, Andrew’s descent will be removed “Matowy town” 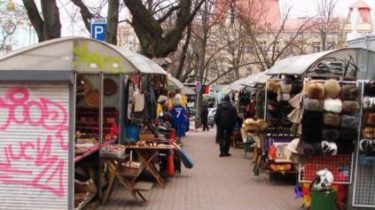 in Kiev will be removed “Matowy town” which arose at the beginning of Andrew’s descent.

This was announced by first Deputy Director of “Kiyevblagoustroystva” Andrey Andreev.

According to him, all owners of “Kiosks” requested to execute the contract with the asset holder and move its retail space in the artists ‘ Alley. Traders must do this before March 1, then “Kievblagoustroystvo” dismantle illegally installed facilities.

In the river embankment was removed a huge floating IAF

“This compromise proposal the city authorities on the background of the fact of unauthorized establishment of the mentioned vehicle, that is, without any authorization documents”, – noted the official.

According to Andreev, the decision to dismantle the Kiosks and checks permissions was preceded by complaints from parents of nearby school.

On the Sevastopol area, communal workers clear the transition from the Mafs: sellers outraged

“Complaints boil down to the fact that the Antiques market is not the “Museum” in which teenagers after school have to pass their education. One way or another, but is captured by dealers and turned into “Shanghai” historical part of the capital will be released and removed”, – said Andrey Andreev.

Earlier it was reported that in Kiev still illegally work more than fifteen hundred Kiosks that pose a threat to people who work there and live nearby. Of these, 1239 located in the protected zones of water utilities, and 493 in security zones of objects of sewage. Of them for the year employees “Kyivvodocanal” dismantled or moved about 90 developments. It is noted that the MAF preventing the rapid elimination of accidents in case of breaking the tube, that is why the “Kyivvodocanal” calls to demolish or move the structure from the buffer zone networks.