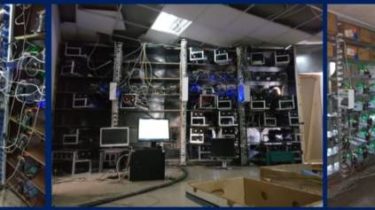 The Prosecutor General and the SBU found in Kiev, Kiev and Cherkassk areas of the room, where he placed more than 400 farms (devices) production digital currency. It is then converted via forbidden in Ukraine e-wallets QIWI and “Yandex money”, and money was sent to Finance terrorists “DNR” and “LNR” – for the purchase of military uniforms, equipment, weapons and ammunition.

On this day, February 1, during a joint briefing said the Deputy Prosecutor General – chief military Prosecutor Anatoly Matios and head of Department of counterintelligence protection of state interests in the field of information security SBU Alexander Klimchuk.

In Cherkassy on the so-called “farm” detected an unauthorized tie-in to the mains electricity. According to preliminary calculations, the light had stolen almost 800 thousand UAH.

“The investigation produced data on the number of persons who contributed to the illegal import of dual-use goods, measures are now taken for establishment of location of the organizer of the illegal transaction, as well as their delivery to the bodies of preliminary investigation”, – said Matios.

“According to our data, these cryptocurrencies were used by illegal armed formations on the territory of “LNR” and “DNR” for funding military actions. In addition, they were used to Fund campaigns against our country,” said Klimchuk.

Criminal proceedings under investigation under article 258-5 (financing of terrorism), article 212 (evasion of taxes, duties (mandatory payments) of the Criminal code of Ukraine.

Seized farm mining, which cost about $ 4 million, want to send the National Agency for recovery of assets.