“Do not expect serious fluctuations,”: Groysman is confident in the stability of the hryvnia 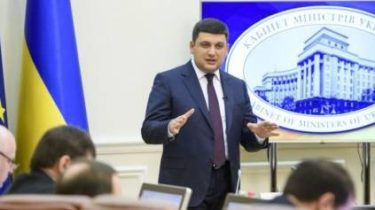 Prime Minister of Ukraine Volodymyr Groysman said that significant fluctuations of the hryvnia in the near future is not expected.

“We have no fixed rate. More demand, less demand – the currency fluctuates, it always will be. You remember I few weeks ago said that the hryvnia stabiliziruemost and the hryvnia has stabilized, strengthened. I do not expect any serious fluctuations. The economy is growing, so I think that our task is only to strengthen the national currency”, – said the head of government.

“Ourselves to deal with its heroes and history”: Groisman about relations with Poland

Earlier it was reported that during the past year, Ukraine’s GDP grew by 2.1%, while inflation was 13.7%. In this year the economy will grow slightly faster pace (in the state budget laid 3%), and inflation, though reduced (to 9%), however, will remain high.