“National squad”: Who are the nationalists, who resented the social network and threaten to use force 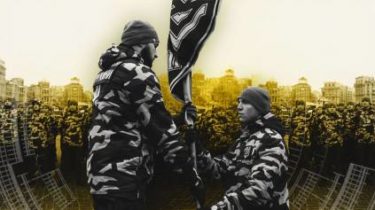 The evening of January 28 in the center of Kiev Chagall unusual March. Hundreds of men in the same camouflage jacket with stripes “National teams” (ND) on the back, some in black uniforms and balaclavas walked down Khreshchatyk.

They were not political posters, the column moved in silence. In Kiev fortress, in the light of the torches, semi-mystical atmosphere, they swore allegiance to the Ukrainian nation.

The next morning, January 29 on Facebook page appeared a video of an event with a threatening caption: “We will not hesitate use Force to establish Order, which will bring Prosperity to each Ukrainian family!”.

About “National teams” is little known. In fact, this organization is a wing of the political party “national body”. She, in turn, connected with the regiment “Azov”, which is headed by independent MP Andrew Biletsky. Earlier in Ukraine and in the West “Azov” has repeatedly been accused of radical nationalism and fascism. Similar charges after the March and the first public statements ND sound to the last.

We tried to understand who these people are in camouflage, for what and with whom is ready to fight, and why their leader spent two years in jail.

On the official website of the “National teams” in the “About us” section has just one paragraph: “It is an organization whose purpose is to ensure order on the streets of Ukrainian cities. The personnel are ex – combatants, Patriotic youth and concerned citizens who share our desire to improve the security situation in the state.”

Videoton tried to find out who obey the famous National team

The monopoly on violence is only the state. So the Minister of internal Affairs Avakov described the formation of the so-called national teams that on Sunday were shocked Ukrainians and the demonstration of its mass. Then six young people defiantly on the Maidan came to take the oath of allegiance, but to whom? 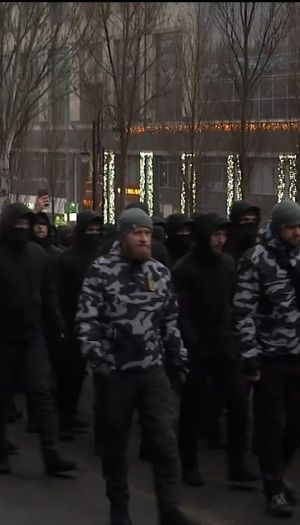 Are shown the four causes of the organization, namely, the danger on the streets, the threat of full-scale invasion, social depression, the threat of raiding. It is indicated that “National squads” engaged in the protection of public order, defence of Ukraine, protection of small and medium businesses and promoting a healthy lifestyle.

Through the website, you can also make a complaint – for this there is a short form. In addition, there is the option of joining the organization, offering to answer five questions, including, “do you have a legal weapon” and “are you a member of the ATO”.

“Nazarus” as a political force originated in October 2016, on the basis of the regiment “Azov” even two years earlier – with the beginning of Russian aggression in the East of Ukraine was formed by the Ministry of the interior. Because of this, “Nazarus” and directly Andrey Biletsky associated with interior Minister Arsen Avakov. 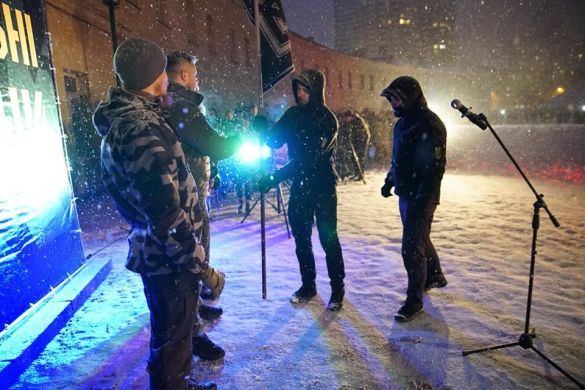 According to Chernyshov, the idea of creating a ND belongs to Igor “Cherkas” Mikhailenko. Mikhailenko was the second commander of the regiment “Azov” and now heads the organization. About it on the website ND almost no information, only the large photo and the caption: “a nationalist, a veteran, a family man, an athlete”.

In conversation with TSN.ia Mikhailenko said that he had met with Bielecki in 2005, when they were both members of the Kharkov organization “Patriot of Ukraine”. There continues Mikhailenko, he stayed until 2011, actively engaged in military training.

In August 2011 the office of this organization was a conflict between Kharkiv Sergey Kolesnik, Igor Mikhailenko, Andrew Bielecki and another member of the “PU” Vitaly Knyazem.

“To us, a man came to the office (Sergey Kolesnik – Kharkiv journalist who has positioned himself as an anti-fascist – ed), grabbed my clothes, had a gun in his face and started shooting. For this he got the barbed injury and one blow to the head, and we got bullet wounds. After this incident I got a case of attempted murder”, tells his version of the incident Mikhailenko.

As a result, all three were arrested in December 2011 on charges of attempted murder of a journalist. After sitting in jail for 2 years and 4 months in 2014, the trio came under the Amnesty law on political prisoners.

From Kolesnik and trial another version. MIA then reported that members of the nationalist organizations was slightly injured by rubber bullets, but Kolesnik unconscious hospitalized. He was diagnosed with traumatic brain injury, stab wounds in the chest, contusion of the parietal region and trunk. This conflict is viewed as an attack on Kolesnik with violence. During the trial he said “I just killed”.

What you do ND is always a challenge. Chernyshev remembers that during last year’s shelling of Avdiivka by the “DPR” members of the organization helped residents with food and warm clothes were also in Kalinovka of Vinnytsia region. He explains that ND cooperate with the police and are unarmed. “We generally try to coordinate their actions. When we see attempts of a crime, sure call the police and transfer the detainees to them. In our work we are guided by article 207 of the criminal procedure code that the Ukrainian, who sees the offense, must stop him,” says Mikhailenko. However, the question of whether the organization is coordinating its activities with the head of national police Sergey Knyazev or Avakov, Chernyshov says no.

Information on the Internet about the good deeds ND less, but a lot of scandals. Journalists “Kremenchug newspaper” removed the conflict that arose in December last year, between the members of ND and the police. “Vigilantes” picketed the illegal, in their opinion, construction. Between them and the police there was a fight, one of the members of the organization were detained. There is also a video in which members ND one presence in the room “helped” make the budget the deputies of Cherkasy city Council.

On Facebook organizations it is also possible to find video training, examples of how “the terrorists” lectures on paramedical schools and taught high school students to assemble and disassemble machines.

“The police can not cope with their responsibilities. We are not going to patrol the streets in the format of patrols, there are people who get paid for it. There are many community groups that take on this niche. We reject this trend, explains the mission of ND Mikhailenko. – We are pressing issues. For example, there is in Cherkasy reservoir, where the largest volume of fresh water in Ukraine. We go out there and protect the fish that suffers from poachers. There is a problem of deforestation – we’re going into the woods and protect our nature.”

Where “vigilantes” take the funds for such social activities? In Facebook ND explain that all the fighters have uniforms and chevrons that must be earned. “We buy all this on the membership fees of our soldiers. Other expenses we have, and therefore don’t need any oligarchic sponsors,” the statement reads.

The same Mikhailenko says: “We exist only due to the altruism of people who are in our organization.”

Among the possible wealthy sponsors ND called police, subordinated to the Ministry which is the “Azov”. However, several interlocutors TSN.ia in the presidential Administration and close to Petro Poroshenko convinced that in fact the action of ND in the capital was not agreed with Avakov, and Biletsky he had no control.

“Neither Avakov nor Poroshenko nor other officer for us is at least minimally credible public face for one simple reason – this government missed a great chance. In 2014, the maximum apariv of the Ukrainian people, and for four years they lost everything was,” said Mikhailenko.

Almost the same repeats close to Avakov interlocutor: “to Get the “Right sector”. There is now 90% of youngsters. So anyone who thinks that the controls “Right sector” and other radical right-wing party, idiot.”

He is sure that the problem with the dobrobatami arose because at the time of their fighters withdrew from the front and replaced the APU fighters: “on the one hand, of course, was right. But that is what is now busy “Azov”? Are under Mariupol as a backup team.”

Avakov himself a position on the existence and activities of ND formulated clearly: “the state of Ukraine there is only one monopoly on the use of force, state national guard, national police, the armed forces. All other paramilitary formations which were trying to position itself on the streets, is illegal.” 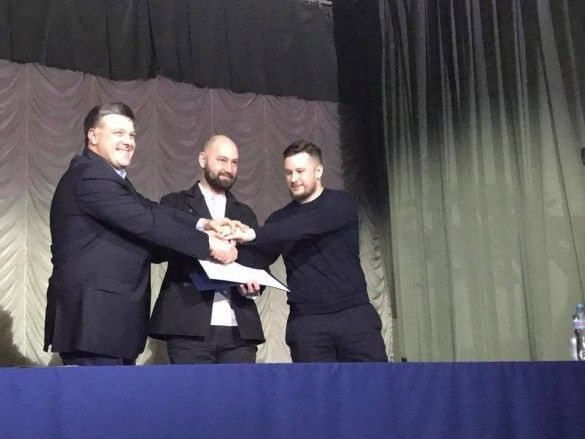 One of the advisors to the interior Minister considers that intensification of LP is the result of the growth of “political ambitions Bielecki” and Hello to fellow nationalists. For what in the context of electoral sympathies are competing right-wing forces? According to a survey by “Razumkov Centre” and Fund “Democratic initiatives”, held in mid-December 2017, party Bielecki has a 0.5% support “Right sector” – 0.3% and the “Freedom” of 3.2%. So the nationalists can count on 4% of the votes to pass the barrier to the Parliament to 5%.

However, in presidential Administration consider that “right” has room to grow. Their total electoral potential, i.e. the best possible result in the parliamentary elections – 12%. In terms of – it’s about 40 seats and the possibility of creating your faction. However, for such a result “right” is necessary not only to unite, but loud to remind myself. And, if the stock ND – attempt to do the latter, probably not the last.