The GPU will appeal to Parliament to lift the immunity of former head of “Naftogaz” Bakulina. 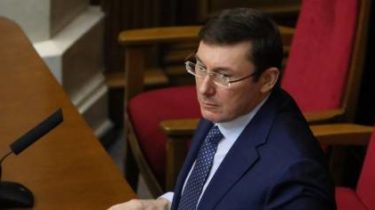 The Prosecutor General’s office will appeal to the Verkhovna Rada regarding permission to prosecute a Deputy from the Opposition bloc, former head of the NJSC “Naftogaz of Ukraine” Evgenia Bakulina.

This was stated by Prosecutor General Yury Lutsenko during a briefing, writes “Ukrainian truth”.

“Planned submission to the Verkhovna Rada with a request to give permission to prosecute Mr Bakulin. This performance will make next week, and will be reviewed in the prescribed manner”, – he stressed, noting that we are talking about bringing Bakulin to responsibility under articles about creation of an organized criminal group, embezzlement of public funds, and the like.

According to Lutsenko, Bakulin is a MP, but Ukraine has not visited recently.

“However, for any further suspicions, the ad in the search, etc. – we need a resolution of the Verkhovna Rada. We will request the lifting of parliamentary immunity, the detention and arrest”, – said the Prosecutor.

In addition, Lutsenko said that in the case of “towers Boyko” sentenced two people: the Vice-Chairman of the Board of “Chernomorneftegaz” Alexander Katsuba, who made a deal with the investigation and repaid 130 million UAH of the state budget” and the employee “Naftogaz of Ukraine” Shevchenko, who “repented and has also provided important data for investigation.” In respect of another employee of “Chernomorneftegaz” the court directed the indictment.

“It is declared suspicion and the measure of restraint to two persons: the Chairman of the Supervisory Board “Vernum Bank” Natalia Ignatchenko and Anton Frolov, her subordinate. Also it is reported about suspicion and declared wanted the former head of national Bank Sergey Arbuzov, Chairman of the Board of “Chernomorneftegaz” Sasuke, his adviser Sahlawi, Director of the Department of Medica, head of Department “SJSC “Chornomornaftogaz” Savchenko. Also today declared suspicion and declared wanted, the Deputy Chairman of “Naftogaz of Ukraine” Yevhen Korniychuk,” he listed the head of the GPU, noting that Korniychuk’s probably located on the territory of Ukraine and is still hiding from the investigation, and recommending him to voluntarily contact the GPU, “which will affect the characterization of his crimes.”

In addition, the GPU appealed to the colleagues from Latvia on the notice of suspicion to the owner of the “Riga shipyard” Vasily Melnik.

“Most importantly, we received information and perform freezing and analysis of cash flow on accounts that received the stolen funds in the amount of approximately $ 144 million. It could lead us to other suspicions and other submissions to the Verkhovna Rada, if it is proved that the funds received from those accounts to accounts of other officers of the Ukrainian state or state officials at that time”, – Lutsenko told.

We will remind, earlier Lutsenko said that Yanukovych and “family” organized scheme “towers Boyko”. The attorney General added that the GPU at this stage of the investigation has no proofs of participation of the leader of the faction “the Opposition bloc” Yuriy Boyko to the corruption scheme.